Just when we thought no one could beat Szechuan Restaurant Wilmington lunch buffet, lo we stumbled upon Chinatown Buffet in Dover Delaware.

Man, how do these Chinese offer these ridiculously low-priced buffets?.

We don't know how they do it.

But we do know now that Chinatown Buffet in Dover offers a super bargain over 55 items lunch buffet for $6.50.

Yes! it is $6.50 and 0.95 cents cheaper than the lunch buffet at Szechuan Restaurant in Wilmington.

When entered Chinatown Buffet around noon, the restaurant was buzzing with activity and there were over 20 diners relishing their soups, fried rice etc.

We were greeted by a young energetic Chinese staffer Mr. Winston manning the cash counter.

We hesitatingly asked Mr.Winston whether any 100% vegetarian items were available on the buffet.

The gentleman quickly went around the buffet station and came back with just one item (sauted beans) that has nothing walking, flying or crawling included (besides, of course, the pastries and fruits).

He quickly indicated we can order anything from the a la carte menu and they would make it pure vegetarian.

We settled down at a table and Mr.Winston came to our table with a menu card and helped us to place an a la carte order for the vegetarians in our group.

The meat-eating members in our group chose the $6.50 lunch buffet.

Appetizer and entree items were all neatly placed in two rows and desserts separately by the wall.

Well, that was more than overwhelming even for somebody like us who love good food.

We made three trips to the main appetizer and entree buffet section and one trip to the desserts and sampled a few items.

Here is our take on Chinatown Buffet Lunch Buffet:

Desserts at Chinatown Buffet are a combination of pastries, cut fruits, Jelly, Cookies and Ice Cream. 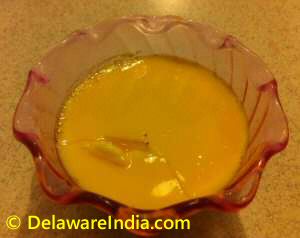 Since there was only one pure vegetarian item sauted beans, we placed an a la carte order for the vegetarians buffs in our group.

Our a la carte order included:

Our Vegetable Lo Mein landed on our table within eight minutes of placing the order followed by the Vegetable Soup, Special Garden Vegetable and White Rice 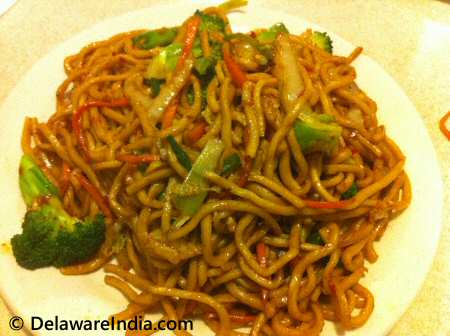 The serving size was sumptuous for the price we paid.

Hey, Chinatown Buffet's Vegetable Lo Mein Noodles are better than the one served by some of the other Chinese restaurants on Rt. 13.

It included plenty of vegetables - Broccoli, Carrot, and a dash of red chilly sauce.

While we enjoyed the Vegetable Soup we would prefer being served in a ceramic bowl rather than a plastic takeout container. 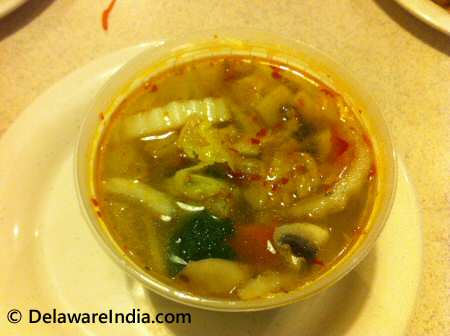 Vegetable Soup
You see some times hot soup in a plastic container emits a nauseating chemical odor and ruins the pleasure of enjoying the soup.

Also, the soup should have been served first before the Vegetable Lo Mein Noodles.

The serving size was sumptuous and came with a small bowl of White Rice. 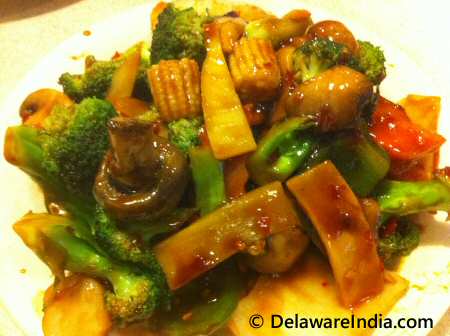 Besides the $6.50, 55-Item Super Bargain Lunch Buffet what we liked at Chinatown Buffet was the professional and friendly handling of the Vegetarian diner in our group.

The replacement/ filling in cash counter waiter Mr. Winston - a cheerful fella went out of his way in assisting us with our pure vegetarian only a la carte order. As promised our a la carte items were all reasonably spicy to suit our spice hardened Indian palates.

Mr. Winston even checked back with us before substituting Vegetable Soup with Hot and Sour Soup as the later includes some non-vegetarian sauces.

He also ensured that we got boxes to pack our left over food. Hey he even included a copy of our a la carte order bill, a take out menu with the boxes.

Our water glasses were refilled and used plates removed promptly.

But no restaurant is perfect and there is always a service snafu or two.

Service snafus at Chinatown Buffet in Dover came in the form of relentless staring by a middle aged Chinese Waitress standing next to the cash counter and clueless young dining room waitress who attended our table.

The clueless young waitress brought Vegetable Lo Mein Noodles first and got us the Soup only after we enquired about it.

Also, she did not bring the white rice with our Special Garden Vegetable as mentioned in the take out menu.

Instead, the waitress asked us indifferently "do you want white rice" with your Special Garden Vegetable.

Yes, of course we want White Rice with our Special Garden Vegetable. Otherwise, how can any one eat just the vegetable with hot sauces without White Rice?

Then there was this middle aged Chinese Waitress standing next to the Cash Counter and staring continuously at our table in the most irritating manner.

We wondered whether she had not seen human beings in her life before.

Notwithstanding minor irritation over service issues, we recommend Chinatown Buffet on Rt 13 West in Dover DE for its $6.50, 55-item Super Bargain Lunch Buffet.

Sure, the number of items on the buffet may be overwhelming but you can pick and chose items from a wide spread of appetizers, entrees and desserts.

Our suggestion to Vegetarians is to avoid the lunch buffet and go for a la carte menu. - © DelawareIndia.com