Chinese buffets in Delaware are generally a triumph of quantity over quality.

The sheer variety of items and the low price makes you rub your eyes in disbelief. 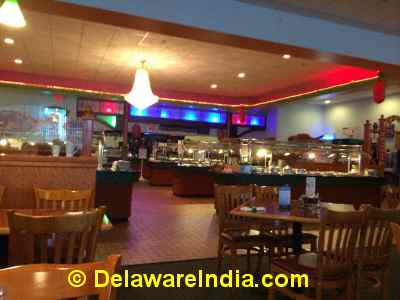 For quantity-minded folks, Chinese buffet restaurants seem like one of God's few gifts to Delawareans.

Where else but at a Chinese buffet can you get a choice of 50 plus items including several kinds of Sushi and six or seven varieties of ice cream for a mere $6.99.

But the flip side of Chinese buffets is that, with rare exceptions, the food seldom leaves you spellbound.

I'm not complaining because no one ever goes to a Chinese buffet expecting a Michelin-grade restaurant.

Except for the decor and the address, there's not that big a difference in the food.

I recently dropped by Old Town buffet in Dover to try the food there.

Old Town Buffet is located on S.Governor's Ave (off RT-13) in the same complex as Ollie's and Harbor Frieght tools shop. 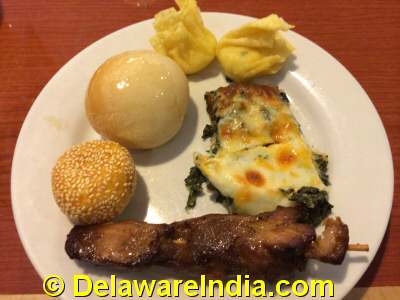 Sesame Ball, Chicken on Stick, Spinach & Cheese etc
Because of its proximity to the Dover Air Base, Old Town Buffet attracts a stream of air force personnel.

I dug into several items during my visit.

Mostly, I was disappointed. 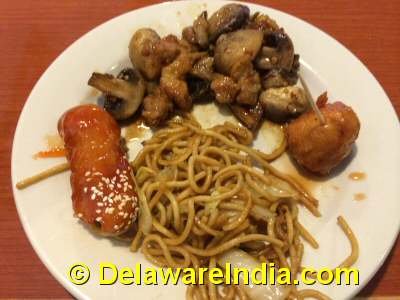 Not in the least bit spicy, it was an affront.

Chicken on a stick was cold and flavorless.

Hot and Sour Soup was the same gooey stuff it is at most Chinese restaurants.

I was in ecstasy when I spotted Kimchi, the foul-smelling Korean favorite.

Kimchi is an eternal favorite of mine. 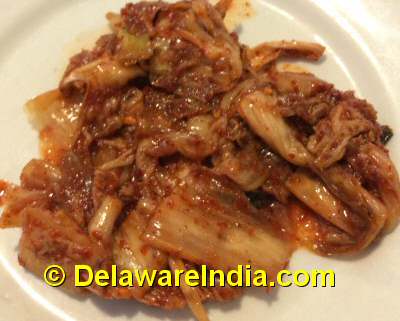 Korean Dish Kimchi
But that too had gone a bit awry at Old Town buffet.

At Old Town Buffet, red chilies overwhelmed the flavor of cabbage and other ingredients.

I was also not pleased that the Kimchi wasn't fermented enough.

The Kimchi at King Buffet is far better.

Since I'm a huge fan of Kimchi and willing to forgive any transgressions here, I did not waste anything on my plate.

There were more varieties of Sushi at Old Town Buffet than I could count.

I also helped myself to some Wasabi (a green paste kept near the Sushi Rolls). 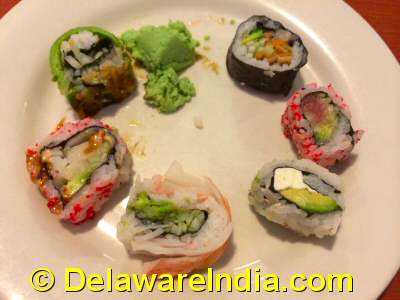 Variety of Sushi Rolls
Be warned that Wasabi has an odd, pungent flavor to it.

If I return to Old Town Buffet it'll be primarily for the Sushi rolls.

Let's get to Ice Creams now, shall we.

In my dictionary, there's no such thing as a bad Ice Cream.

Like its Dover rivals King Buffet and Chinatown Buffet, Old Town Buffet too offers several varieties of Ice Cream as part of its buffet.

I heaped three different flavors of Ice Cream (French Vanilla, Strawberry and Chocolate) in my cup. 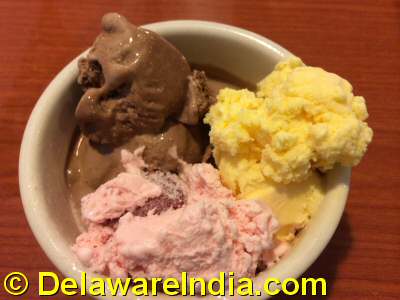 Chocolate, Strawberry & French Vanilla Ice Cream
And I relished them all although I must say the Strawberry was the best.

Except for its Sushi Rolls, there's not much to recommend Old Town Buffet unless you're a big fan of lots of food at cheap prices.

Tip - BTW, if you're visiting New York City here's a valuable tip for you - the Chinatown bus in Dover starts and stops in front of Old Town Buffet. - © DelawareIndia.com