No sooner did we hear that a new Indian restaurant Zaikka had opened in the LOMA district of Wilmington, Delaware than we turned on our GPS and headed there.

Alas, it has only a limited selection of Indian curries and you have to choose between a rice bowl or naan roll or salad greens during lunch.

In our opinion, no sane Indian goes to an Indian restaurant for rolls or, God forbid, salad greens. So, we tried rice bowls with different Indian curries. 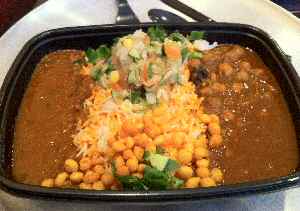 Zaikka ($6.50) Veggie Bowl - Tasteless Travesty
Usually the Veggie Bowl comes with only one curry and you have to pay $1.25 extra if you want a second curry. But we substituted Channa Masala for Tofu (hardly an Indian thing).

Zaikka's Samosa ($1.65 for one piece) was big and that's the only thing we can say in its favor.

Unfortunately, the Samsoa was lukewarm in the center and cold on the sides and edges. If you're serving reheated food to paying diners, at least reheat it properly. 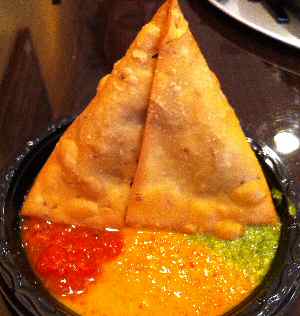 Zaikka ($1.65) Samosa - Horrid
Also, the Potato stuffing inside was way too pasty and flavorless.

One bite into the Samosa reminded us of eating mashed potatoes from an American Grocery Store Deli. We did not get much relief from the three Chutney accompaniments. The chutney accompaniments, - green, red chilly and tomato garlic chutneys, were cold, not flavorful and not spicy enough for our spice hardened Indian palates.

By the way, serving cold Chutneys to paying diners ranks pretty high in our dictionary of sins of an Indian restaurant.

For the non-vegetarian rice bowl, we selected Zaikka Chicken for protein, Tikka Masala for curry, Green and Red Chutneys and Seekh Kebab($2.25 for one piece), which was sold separately during our visit as a daily special. 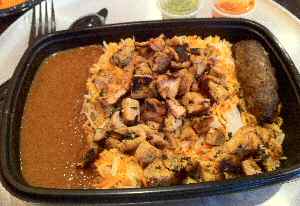 Zaikka ($6.95) Chicken & Seekh Kebab ($2.25) - Crappy
Cubed Zaikka Chicken was not warm and not in the least bit flavorful. Worse, the chicken pieces were hard.

The medium size Seekh Kebab was a close competitor to Zaika Chicken in terms of poor taste and flavor.

Tikka Masala had a crappy, weird and offputting taste. We did not relish it one bit.

Folks, Tikka Masala (Pathak brand) sold by the grocery store Food Lion in a bottle has better taste and flavor compared to the impostor served by Zaikka Indian Grill in Wilminton DE.

The overall serving size is small given the $9.20 we were charged in total.

Hey, many Indian restaurants in Delaware offer as many as 15 items in the form of all you can eat buffets for $9-$10 on weekdays.

As we moved to the cash counter, the Indian bloke wearing glasses yelled, Do you want anything to drink and listed Masala Chai, Mango Lassi and Soda.

We fell for Masala Chai. In restrospect, a big mistake.

For Ziakka's Masala Chai is not freshly prepared.

Yes, we were surprised because before we could finish saying Masala Chai, the tea cup was in front of us. With a strong flask tea flavor, Zaikka's Masala Chai brought tears to our eyes.

Worse, the Masala Chai cup was defective and the hot Tea leaked badly staining our dress during the drive back.

Zaikka's staff is a bunch of lazy cows who don't even care to put labels on the different curries to identify them. Without the labels, ordering at the counter becomes a pain. Hey, how much time does it take to put up small labels? Two minutes or three minutes at the most.

When we selected our Veggie Bowl we requested for both the curries Vindaloo and Channa Masala to be added on either side of the rice placed in the middle. It took three tries to get this simple task accomplished.

How on earth can you taste the two curries if you mix them up. Clueless bozos.

After a horrid meal, we arrived at the rather depressing and dispiriting conclusion that monkeys could cook better than these Zaikka jokers.

Folks, starve if you must but avoid this impostor of an Indian restaurant Zaikka.

With its crappy and flavorless curries, Zaikka Indian Grill is a benchmark of bad Indian food in Wilmington, Delaware.

If you crave Indian food in Wilmington, the restaurants to visit are India Palace or Nirvana. Not this impostor Zaikka Indian Grill. - © DelawareIndia.com