When we heard that a new Indian restaurant had opened on Concord Pike in Wilmington (DE) we couldn't contain our excitement for Delaware has very few places offering decent curries.

Given our insane passion for Indian food, we quickly made Mazza our port of call recently for lunch in fond hopes of a flavorful meal.

For much of the food we tasted at Mazza was crappy and the service rendered was disgustingly crappier (more on the crappier service later).

As is our wont, we let our taste buds wander around an array of items stopping for a bite here, a nibble there and a sip yonder.

Vegetable Pakoras were salty and cold. Hey, no surprise that we did not relish them one bit even with the green chutney accompaniment. 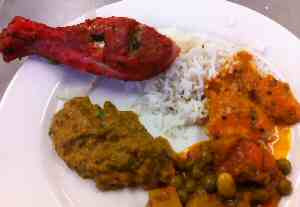 The least offensive vegetarian item on the buffet table was the dish labelled Punjabi Curry that tasted like Kadhi Pakora. Punjabi Curry set in a medium-thick yellow colored gravy with Cauliflower Pakora was not bad. 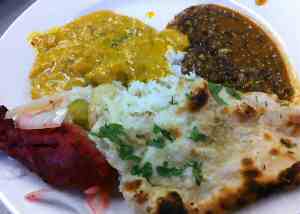 Awful Dal Makhani (top right),
OK Punjabi Curry (top left)
Garlic Naan came hot to the table and was soft. But we had to wait endlessly for the plain Naan to arrive and when it finally arrived was not even lukewarm.

We had a hard time figuring out the worst meat item as most of them were bad and competed fiercely with each other for the dubious distinction of being the worst.

After a few bites of each, we bestowed the 'worst meat item award' on Mazza's Tandoori Chicken. 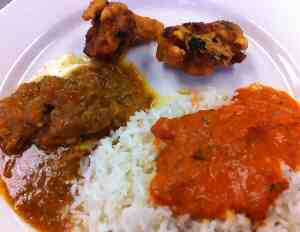 Salty Veg Pakoras (top),
Horrid Chicken Curries
With zero evidence of any marination and that ugly pinkish-red color, Mazza's Tandoori Chicken was horrible and it seemed like we were chewing raw meat. Ughh!

Chicken Tikka Masala was a flavorless abomination while the humble Chicken Curry was grossly underspiced.

We topped off our depressingly distasteful meal at Mazza with a small serving of Rice Pudding and a cup of Indian Tea.

The medium thick Rice Pudding was cold and low on sugar. While the Tea was hot as its label indicated and had a nice masala flavor it was way too watery. Say, are milk prices that high in Delaware?

What compounded our misery at Mazza was the pitiful service and some unhygienic dining room practices.

We had to repeatedly ask for Plain Naan (part of the lunch buffet). The first time we went up to the kitchen counter and asked for it. But even after 20 minutes of waiting we never got the Plain Naan. Wonder what the three people in the kitchen were doing? Sleeping?

Our tall waiter was too busy smoking outside to help us out. Only after he returned from his smoking trip, were we able to ask him to remind the kitchen staff about our Plain Naan.

Also, we were not pleased to see that neither the waitstaff nor the kitchen staff cared to stop diners who were carrying their used plates to the Buffet Table for refilling. It is particularly disturbing in a place like Mazza where the lunch buffet items are placed close together in two rows one behind the other. To reach the dishes at the back you need to lean forward a bit with your plate. This makes it extremely unhygenic if diners are allowed to refill their used plates instead of getting fresh plates for each trip to the buffet table.

Disgusting. It is these kind of unhygienic dining room practices that can result in potential contamination of food and turn into a health hazard for other unsuspecting diners.

We hope the Delaware Health Department looks into these unhygienic dining room practices at Mazza and levies a hefty fine on the restaurant.

Overall, our meal at Mazza was a complete disappointment.

We wouldn't revisit Mazza if it's the last Indian restaurant on the planet! - © DelawareIndia.com