Given the poor quality of food at a lot of Indian restaurants in Delaware and Philadelphia, the opening of a new Indian place is often a cause for alarm than a reason for celebration.

Still hoping for the best and as part of our never-ending quest for fine Indian food, we dropped by at Taj Palace in the Meadowood 2 Shopping Center on Kirkwood Highway in Newark for lunch the other day.

Alas, with just a few exceptions Taj Palace, Newark (DE) has little to recommend it. 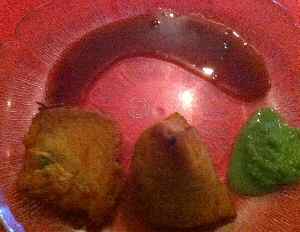 Lukewarm Bread Pakora & Hard Samosa (right)
Though the taste of Potato filling in the small Samosa was ok, the hard edges and lukewarm temperature did not endear it to us.

Devoid of any seasoning, the watery Dal Soup was most unpalatable and we just couldn't push more than two spoonfuls into our mouth. Bread Pakoras turned out to be the sole saving grace among appetizers and we would have enjoyed this North Indian delight more were it hot (temperature) and not lukewarm.

Clearly, Taj Palace was playing an April Fool prank on us with the Lemon Rice. 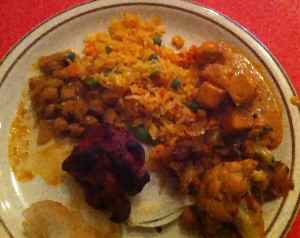 Awful Lemon Rice (top), Shahi Paneer (top right),
Watery Kadai Channa (top left), Raw Alu Gobi
With no evidence of any lime being used in its preparation, no peanuts, no curry leaves seasoning, no turmeric powder, this popular South Indian fixture was awful and an utter travesty. By the way, who adds beans, corn and carrot to Lemon Rice.

Whether it was mislabeling or clueless cooking, it was unforgivable that an Indian restaurant should inflict such garbage on diners.

Kadai Channa was mildly spiced and the gravy too watery.

Saag was again mildly spiced and a bit of cream would certainly have added to the taste.

Shahi Paneer in a not so creamy sauce and hard, chewy cubes of Paneer was the best among the worst.

Alu Gobi not only had an awful raw flavor and there were no Alu (potato) pieces.

Weird! Are potatoes that expensive in Delaware?

Naan Bread were no good.

Others were hard and chewy.

We were also unhappy to discover a small bone-like hard piece sticking to one of the Naan Bread. 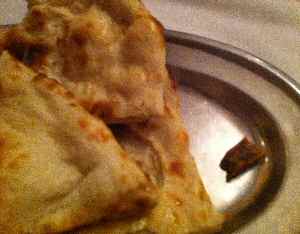 On the Chicken Side

Tandoori Chicken was hard, not well marinated and didn't give us much joy.

Butter Chicken in a creamy gravy was alright but didn't send us into a swooning ecstasy. 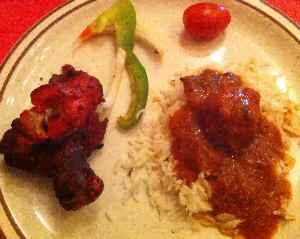 Hard Tandoori Chicken (left), Tangy Chicken Bolls
Chicken Bolls (sic) in a tangy, thick gravy was a delight that has salivating at the mere thought of it. One of the few hits in a meal with lots of misses. 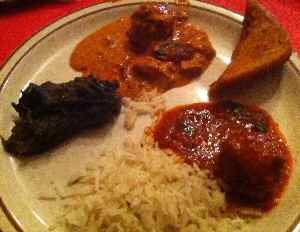 Rice Pudding was creamy but low on sugar.

Can someone please tell us how an Indian restaurant can screw up this most simple of desserts?

Although the spacious restaurant was mostly empty, our waitress pushed us into a dimly-lit section. She switched on the lights toward the end of our meal only after the chef came out and alerted her to the semi-dark condition of the room.

There were no serving spoons for the soup and no serving tongs for the appetizers. We had to ask for both separately.

The waitress was not to be found when we wanted more Naan and later additional napkins because, for the most part of our meal, she had retreated into the kitchen.

Given the disappointing food and service, we're unlikely to return to Taj Palace any time in the near future.- © DelawareIndia.com